skip to main | skip to sidebar

All the characters in "The Hobbit" have different opinions of the greatness of wealth.  Gandalf doesn't think high on the matter, but if he deserves it and he doesn't get any, then he'll mention it.  Bilbo probably wouldn't go on an epic adventure for wealth, would he?  Bilbo would probably like to stay in his hobbit hole and eat toast, butter, eggs,  and bacon with his tea just boiling!  Thorin Oakansheild doesn't care about wealth, he just wants it for his people.  The Wood Elf Kingdom wants more money because the king wants more money.  Smaug loves wealth.  Smaug will go WAY out of his way to get treasure.  He's really not that smart because he can't even buy anything at all.  He doesn't even have to pay on his morgage!  They realy all have different opinions about money!
Posted by Happy Elf Mom (Christine) at 7:10 AM 2 comments:

Rich hosts would display their wealth by having expensive meals.  Some dining rooms had mosaics showing scraps of food. Sometimes the host would present entertainment.  They would have musicians, acrobats, dancers, jugglers, conjurers, and poets for entertainment.  For dessert, Romans ate stuffed dates. Dinner had three courses.  Slaves would wipe the guests' hands between courses.
Poor Romans didn't even have a kitchen because they lived in the top floors of apartments.  They can't have a woodburning stove because the apartment is also made out of wood.  They would visit a tavern like you would a restaurant!
Posted by Happy Elf Mom (Christine) at 5:43 AM No comments:


Some Roman structures are even better than the ones we have today.

Roman roads are beautiful!  Romans were the first people to use concrete.  They realized that mixing volcanic ash, water, and lime gets you concrete after it dries.  The Appian Way is a speical road that connects Rome and cities in Italy.

Rome didn't just build roads.  They made aqueducts that would help make water travel to a city or cities.  Romans also built apartments that weren't fit for living by today's standards because they could collapse any second!  Their apartments were made of concrete and wood.  Some of the larger buildings are still standing today.
Posted by Happy Elf Mom (Christine) at 8:08 AM 1 comment:

One day, in a bog,  Grendel ate his breakfast.  Later he said to his dad, "I'm tired of cooked mortal meat EVERY day!  We should get some raw!"

Then his dad said, "Fine, then we go shopping!" So they left Grendel's mom home and went on foot to Wal-Mart.  Grendel asked his dad if he could eat a customer while his dad shopped. Dad thought and said, "If the manager is not watching and only one."  He also warned Grendel to wash his hands after he ate because Mom doesn't like blood on her carpet.

Well, something came on the news at Grendel's home while they were out.  The news reporters were speaking of a missing customer.  They talked about some bones on the floor and they say it may be some evidence for us wise reporters and detectives.

Grendel's mom panicked.  "My poor innocent Grendel is at that store!"  She drove like a speeder to the Wal-Mart parking lot.   In her hurry, she forgot to dress up and she only had her underwear on.  When she got out of the car, some customers just ignored her thinking that she was a crazy person.

She ran into the store and took a look at the evidence.  She saw no claws, so she reasoned that Grendel just ate another customer.  She went looking for Grendel and his dad. She eventually found Grendel's dad alone with a worried look on his face.  She yelled, "What's going on?!"

"Grendel is on an Easter hunt," he said.  "He is hoping to get a big chocolate bunny for dessert."

"Ok, let's get out of here, then," she said.  They found Grendel eating the bunny without checking it out.  They put the bunny back on the shelf half-eaten.  Then they got a new one and checked out.
Posted by Happy Elf Mom (Christine) at 10:56 AM No comments:

The animal had short arms with 5 fingers on each hand.  The animal had large eyes.  It was an herbivore. It had long four-toed legs.  It had a long tail.  They lived in North America.  They weighed 121 pounds. It was as big as a full-grown man.
Posted by Happy Elf Mom (Christine) at 1:06 PM No comments: 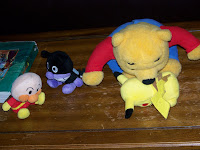 Baikenman: Hey, guess what? First of all, I have the most annoying classmate. And on top of that I have a man-eating teacher! I know you are lucky to stay alive this year! Anyway, here is what my school year is like.

On the first day, Anpanman, the most annoying classmate, went to the bathroom. While he was gone, Pooh-Bear, the man-eating beast (Oh, did I say beast? I meant to say teacher.), was demonstrating how to eat at the cafeteria and ... well, you can guess what happened.

Anpanman came back and asked, "What did I miss?" I replied by saying, "A lot."

Later at the cafeteria they served us raw meat! So I learned to pack my own lunch. Then for social studies we had to play out "Theseus and the Minotaur." When "Theseus" went to the Minotaur, the teacher ate Theseus (because the teacher was the Minotaur.) Then all the students said, "That's not how the story went!"

Baikenman: So that's just the beginning of my terrible school year. I'll remember to pack my lunch tomorrow and hope that I'm not the next victim.
Posted by Happy Elf Mom (Christine) at 7:44 AM 4 comments: 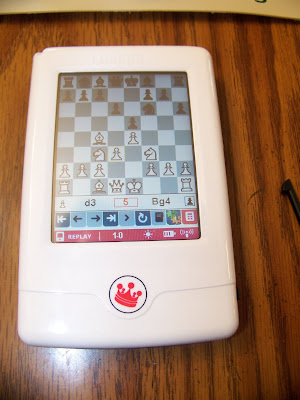 My Monroi is awesome. Instead of notating on paper, you do it on a screen. To begin, press "record." You then write your opponent's name and you say if you're white or black. Then tap the chess piece that you want to move lightly and tap the square you want to move to. After the game, press the 1/2 button and tell the right results and your opponent signs, you sign, and then the arbiter signs. If there is no arbiter, draw 'not real.' Then go to the database and review your game! I hope you'll buy one.

Posted by Happy Elf Mom (Christine) at 10:27 AM No comments: